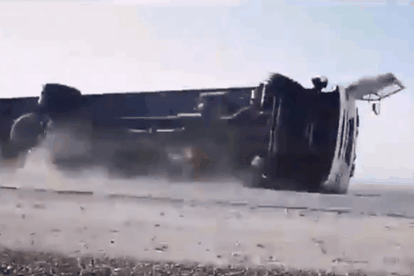 The South African Weather Service (Saws) wasn’t kidding when it issued a warning for severe, gale-force winds ahead of Thursday’s storm. On a day where torrential rain and widespread flooding is expected, the howling gusts have taken centre-stage after a truck was swept from the roadside of the R46 earlier in the day.

Luckily, no-one was harmed in the freak incident, and the driver was able to capture the full destructive force of nature on film. Which is probably for the best, given that he’ll have an employer to report this to…

The footage shows a lorry, transporting a consignment of Simba Chips, pulled up in a layby. With the vehicle rocking from side-to-side, the occupant takes evasive action and leaves his cab to ensure personal safety. Just seconds after getting his phone out, the truck is blown off the road and into a ditch below.

The astounding clip has been shared like wildfire on social media, and it promises to be merely a taste of what’s to come for the rest of the day. The downpours are set to intensify this afternoon, and temperatures will plummet as the sun goes down. Oh, and just for good measure, Eskom is on the brink of load shedding.

Saws issued a brief statement about the dangers of gale-force winds on their Twitter account. They have advised drivers to only travel on roads they know well, and truck drivers have been told to take extra care:

“Gale force winds of up to 90km/h are expected over the Western Cape, Eastern Cape and the southern and western interior of the Northern Cape today. Due to these gale-force winds, roadways especially for trucks can be very dangerous. Be safe when travelling and make sure you know the warning areas.”