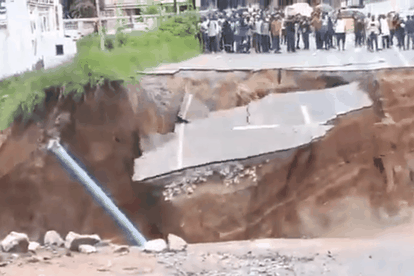 Rain has been lashing down in the northeast of the country for the best part of the last week. In fact, following on from the impact of Storm Eloise, it has been a miserable month or so for the people of Limpopo and Mpumalanga – the latter of which is now battling the impact of a major sinkhole opening up on a road near Nelspruit.

[ALERT ?:] Storm water has collapsed a bridge in Tekwane South on the D2296 Road. Motorists are advised to use @TRACN4route to access Kanyamazane due to the sinkhole until further notice. pic.twitter.com/HAWe254Rcq

Road swallowed by sinkhole near Nelspruit

The route, which is a key point of transit between Mpumalanga and Mozambique, has been completely washed away. A huge chasm has opened up from one side to the other, cutting off residents from their neighbours in the town of Thekwane.

The heaving downpours have damaged infrastructure, blighted major traffic routes, and caused widespread flooding. The clean-up operation promises to be a tough undertaking, as a bridge in Kanyamazane has also been destroyed by the extreme weather. Some locals captured the sinkhole opening up on camera, giving us this dramatic footage:

This is Nelspruit don't ask me about the dude inside nami I Don't know ??? pic.twitter.com/V1pTg8rSK5

The latest deluges have also wreaked havoc in North West and the Northern Cape. Two leading DA officials have issued public statements, calling on the provincial governments to pull out all the stops to prevent any further disasters:

“The D201 road from Pampierstad to Matlapaneg has been washed away and is completely inaccessible to motorists due to the recent torrential rains. Instead of building a proper road, the ANC government wasted R40 million on re-gravelling a road that residents cannot use. The DA may yet refer this issue to the Public Protector for further investigation.”

“Extensive flood damage in the Northern Cape, estimated at R600 million, necessitates the urgent declaration of a provincial disaster. As government is busy assessing the damages, particularly in respect of the roads and bridges that have washed away in the John Taole Gaetsewe (JTG) district, entire communities have been stranded and left homeless.”

Heavy rains have damaged several roads and bridges in different parts of Mpumalanga. In Mbombela, a bridge on a main road linking Kanyamazane and Thekwane North has been washed away. #sabcnews