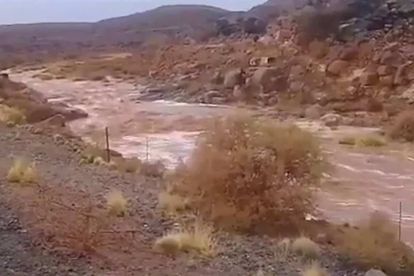 Locals in the drought-ravaged region of the Karoo in the Western Cape are jumping for joy this week, as intense rains lashed down and sparked scenes that hadn’t been witnessed for years.

Rivers are flowing again, and the parched earth finally has something to drink. The crippling drought has had a devastating impact on this part of South Africa, which really has been living hand-to-mouth recently. The local dams were at a combined total of just 16% full last month – but that figure is now expected to rise sharply.

The Department of Local Government – through the disaster management centre – arranged for the delivery of 90 000 litres of water to the drought affected region in the Karoo last month. It was sent to replenish reservoirs in in Ladismith and Zoar, two communities in the Kannaland municipal area. The generous donation was assisted by Coca-Cola, to counter that high demand that usually occurs in these regions over Christmas.

Watch the gushing rivers of the Karoo here:

The good news keeps flowing for the Karoo. These summer rains were captured on video by jubilant citizens, and they’ve been doing the rounds online. Of all people, former Eskom spokesperson Khulu Phasiwe uploaded footage of the surging rivers, and it’s a beautiful sight to behold.

After a 5-year killer drought, some relief as parts of the Karoo, Northern Cape, receive Summer rains. pic.twitter.com/r0lzXDIUN8

The remote Karoo was firmly on the weather map on Wednesday. Swirling winds, torrential downpours and even some isolated flooding incidents brought a perfect storm that had been years in the making.