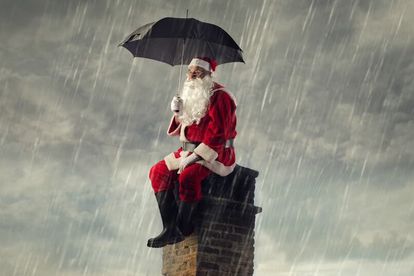 In the run up to Christmas, Britain can expect 70mph gale winds and widespread flooding, forecasters have warned.

The Met Office has issued a 30-hour yellow warning of possible flooding for Cumbria, Lancashire, Manchester and Cheshire.

As Storm Eva strikes (following in the wake of the disastrous Storm Desmond) the region is expected to receive up to 80mm of rainfall between noon today and 6pm tomorrow.

The only good news is that it will all clear by Christmas day.

Travel may be disrupted by the storm, and drivers have been warned to take extra care travelling in he 55mph winds which are likely to hit the country today and tomorrow.

“Festive travellers should be prepared for a mix of conditions, including strong winds and rain. Take additional care,” RAC spokesman Simon Williams said.

The Met Office said: “Be aware of the possibility of localised flooding.”

Balmy temperatures throughout the country have thrown all hopes of a white Christmas out the window.

This weekend saw the warmest late December day for 160 years with parts of Britain hotter than Majorca at 17.1C.

December 2010 was the coldest December on record. Vast temperature differences between then and now pic.twitter.com/E78mdsbV20

But if you’re really desperate for snow

According to weather forecasting models, there is an 80 percent likelihood of snow in northwest Scotland on Christmas day with a slim chance in Wales.

Where is the snowiest place in the UK? #uksnow https://t.co/VQoIaqGgbK