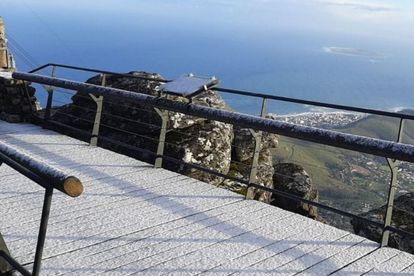 The South African Weather Service (SAWS) said that the cold front making its way across the Western Cape this week would result in snow in the high-altitude areas of four provinces. On Saturday morning, 28 August, the Table Mountain Aerial Company (TMAC) said that it was snowing at the summit of the mountain.

The Table Mountain Aerial Cableway provided pictures and videos of the dusting at the peak. In the 15-second video clip, joyous staff can be seen dancing and heard chanting “Yebo” as the snow makes landfall.

“It’s official! It’s once again snowing on #TableMountain! Here is a video of the beautiful scene, taken from the summit! Stay warm and safe, everyone,” said TMAC.

In the media statement on Friday, the weather service said that disruptive snowfalls of between 5 to 10 centimetres were expected in the high-altitude areas of the Western Cape.

Eventually, snowfall would spread to the Northern Cape, Eastern Cape and KwaZulu-Natal, according to predictions, where rare Level 4 Warnings for disruptive snow were issued as a precaution.

The SAWS said weather conditions across the country could start to clear up from Monday, 30 August.

“South Africans can expect a gradual clearing in weather conditions, combined with a consistent recovery in daily daytime temperatures from Monday onwards. Given that overnight minimum temperatures may take several days to recover in the wake of this cold spell, there is a distinct possibility of overnight frost occurring over parts of the interior early next week.”