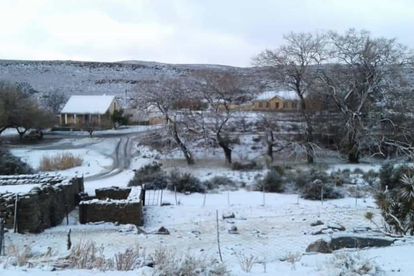 It’s the most wonderful time of the year, folks – well, that’s if you’ve got a thermal jacket and your mittens to hand. An impressive amount of snow has fallen in the Northern and Western Capes of South Africa on Tuesday evening, creating a picturesque scene for the freezing locals.

Where did the snowfall in South Africa?

As expected, the best of the snowfall went to Sutherland in the Northern Cape. The small town is a haven for snow-chasers in this country, and usually gets a dusting when the temperatures drop:

Although traffic disruption was kept to a minimum by these collective dustings, access to some roads in Sutherland was made extremely difficult. However, those who fought the elements ended up taking some rad photos:

Flurries in the Western Cape

Meanwhile, across the wider Western Cape, high peaks ended up getting a covering of the white stuff, too. Hailstorms even battered certain regions of the province, with residents of Grabouw reporting an icy blast on Tuesday night. Boplaas in the Karoo also saw its mountain tops capped by the adverse weather conditions:

Watch videos of the snow falling in South Africa here:

Up to 10cm was forecast to fall in some regions, with light snowfall previously mapped for the Eastern Cape and Free State. However, it was the west of Mzansi which enjoyed the lion’s share of the flurries. After two cold fronts hit the Western and Northern Capes in one day, it was inevitable that snow would eventually make landfall.

SnowReportSA have also given us permission to share a video from their Facebook page, which shows just how wonderful the snowfall was in Sutherland during the afternoon. It really does look other-worldly…