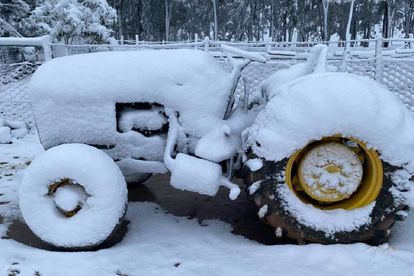 If you’re out and about on the snow trail today, you’ll probably need to plan your route around what’s happening on the roads. Several traffic jams have been reported in high-lying rural regions of SA, where most of the white stuff has settled.

The worst-affected part of the country seems to be Ceres in the Western Cape. The small town has become a tourist trap over the last 24 hours, after it found itself caked in snow. The freezing temperatures have preserved the flakes on the ground, encouraging people from more built-up areas to come and immerse themselves in a winter wonderland.

However, the impact is a significant one…

Since Friday, snowfall has reached parts of the Eastern Cape, KZN, and Northern Cape. The flurries have come during a particularly bitter winter season, but the picturesque conditions witnessed this weekend has been mostly welcomed.

However, the Western Cape has been stealing the headlines this week. Yesterday, we saw Table Mountain get a few flakes… but those in the province wanting to see more of the snow today should heed the following traffic updates: