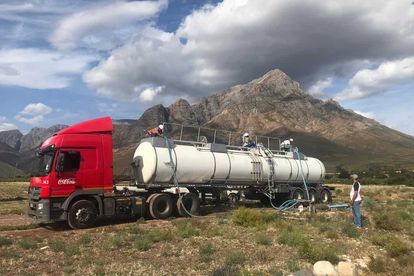 Despite a fruitful year for the dams of the Western Cape and the Mother City, one region of the province has struggled immensely with a prolonged drought saga. The Karoo – home to tens of thousands of South Africans – has its combined water levels sitting at just 16%. But they may have just been given the best possible Christmas present.

The Department of Local Government through the disaster management centre has arranged for the delivery of 90 000 litres of water to the drought affected region in the Karoo. The water was sent to replenish water reservoirs in in Ladismith and Zoar, two communities in the Kannaland municipal area.

Karoo rescued by government… and Coca-Cola

Anton Bredell is the minister of Local Government, Environmental Affairs and Development Planning in the Western Cape. He explained that the generous donation was assisted by Coca-Cola, and was provided to counter that high demand that usually occurs in these regions over Christmas.

“These areas rely on boreholes to fill reservoirs and the boreholes struggle to keep up during period of high demand like the holiday season. Accordingly, we have made the arrangements to assist the towns. We call on the public to take note of the challenges in the province, and use water responsibly over Christmas.

“The water is transported in three 30 000 litre tankers which were kindly provided by Coca-Cola with us paying for the cost of use. We want to thank the company for their help. These ongoing challenges are best resolved by getting multiple stakeholders on board and working together.”

Who is going to benefit?

All consumers in the Western Cape are advised to use water sparingly, as the south-west remains vulnerable to the threats of drought and climate change. The following areas around the Karoo are all set to benefit from the timely delivery: