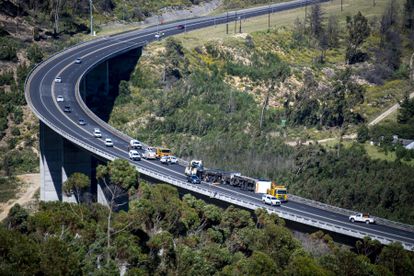 The South African Weather Service (SAWS) issued a pair of wind warnings for the coastal parts of the Western Cape and Northern Cape on Friday, 2 September.

A Yellow Level 3 wind warning was issued for the Northern Cape coast, West, South-west and South Coast of the Western Cape. It is valid from 12:00 on Sunday, 4 September until midnight on Monday.

“The combination of west to south-westerly swells of 4 to 5 metres and strong to gale force north-westerly to westerly winds (65 to 75km/h, gusting 75 to 85km/h) are expected between Alexander Bay and Plettenberg Bay from Sunday morning, including the City of Cape Town and Overstrand Municipalities,” said the weather service.

Wave heights are expected to reach 5.5 to 6 metres south of Saldanha Bay and spread to Plettenberg Bay on Monday, 5 September. The weather conditions are expected to contribute to rough and choppy seas.

The potential impacts of the Level 3 warning include:

A Yellow Level 2 wind warning was also issued for the interior of the Western Cape and Northern Cape for Sunday.

Strong to gale near-gale force winds and gusty north-westerly winds (50 to 65km/h, gusting 70 to 80km/h are expected over the Cape Winelands and eastern interior of the Western Cape and the southern high ground of Namakwa in Northern Cape.

The strong winds are associated with an approaching cold front, which is expected to make landfall on Sunday afternoon.

The potential impacts of the Level 2 warning include:

As previously reported, the weather service advised Western Cape residents to brace for a “significant change” in weather in the coming days, in a statement on Thursday, 1 September.

“After a couple of warmer days over the Western Cape this week, a significant change in the weather is expected from Sunday into Monday, due to a cold front that will make landfall over the south-western parts on Sunday afternoon.”