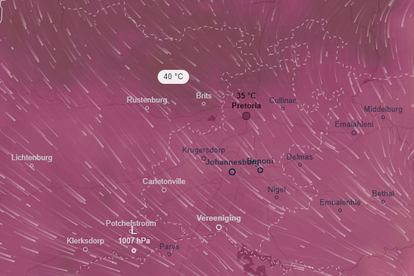 An absolute scorcher is on the cards for Gauteng and north-eastern regions of the country – Photo: Ventusky

An absolute scorcher is on the cards for Gauteng and north-eastern regions of the country – Photo: Ventusky

We may only be a few days into October, but our first post-winter temperatures of 40°C have been forecast in several provinces. In two of the next four days, the heat is set to intensify beyond any uncomfortable measure – affecting millions of South Africans in the process.

Temperatures set to soar in South Africa, with 40°C predicted

On Tuesday, dry and boiling hot conditions will besiege several provinces. Between midday and late afternoon, temperatures will reach their peak – before a near-identical repeat takes place on Thursday. Things will, however, cool down as we head into next weekend.

Some preliminary readings from Ventusky even predict that temperatures could rise to a sweltering 45°C in rural parts of KZN this week. However, that’s not exactly set in stone, and 40°C remains the more realistic forecast for our hot-spots in question.

The provinces of North West and Limpopo will be at the mercy of the highest temperatures coming our way on Tuesday. In Gauteng, northern regions of the province – and specifically Mont Lorraine – will experience peaks of 37°C in the afternoon.

The following locations are forecast to reach temperatures of 40°C or more on this date:

On Thursday, KZN enters the chat. The province will join regions in the north-east, as thermometers rise to unbearable levels. Although Gauteng is on for a slightly cooler day, the mercury will still be pushing the 34°C mark in Johannesburg and Pretoria.

The following locations are forecast to reach temperatures of 40°C or more on this date: