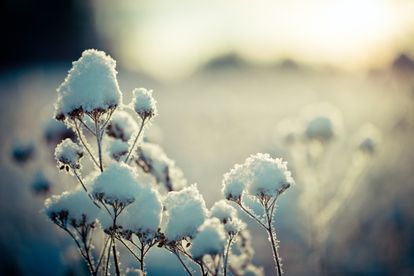 South Africa is likely to see snow at sporadic points in the next few months – Photo: Unsplash

South Africa is likely to see snow at sporadic points in the next few months – Photo: Unsplash

Social media has been abuzz with rumours that a large blanket of snow is set to cover the country this week. However, it’s just simply not true. Apart from a few sporadic showers in coastal regions, a fairly settled period will remain with us for the rest of the month. But what can we expect going forward?

Are we on for more snow this winter?

Forecasting snow is one of the biggest challenges for South Africa’s meteorological experts. They need a number of conditions to fall within an exact range, before the chance of a dusting can be declared.

The delicate operation, therefore, makes long-term snow prediction a highly complex task. Sometimes, seven-day forecasts can pick up the chance of snowfall – but that don’t give us a definitive outlook.

Earlier in April, the SA Weather Service revealed that this winter could be quite disruptive. Above-average rainfall is expected over the next few months, leading to water logging and possible crop damage. An increased presence of moisture in the air could, therefore, lead to more incidents of snowfall and sub-zero conditions.

“The expected above-normal rainfall for the north-eastern parts of the country during late-autumn through to early-winter provides a good opportunity for water reservoirs to replenish in the summer rainfall regions.”

“Above-normal rainfall is expected for the north-eastern parts of the country during the late-autumn and early-winter. There is an increased risk for water logging in areas receiving excessive rainfall that can cause crop damage.”

Where to find the white stuff

Meanwhile, the popular snow spot of Sutherland, Northern Cape, is on course for BELOW normal temperatures this winter, bucking the forecast national trends. Between now and the end of June, the tourist town is expecting to report multiple snow showers. In almost every other region, however, the outlook isn’t so certain.

Temperature: Lets start with minimum ones,you know the ones that make you go outside in the morning and just put your hand out and say "Yoh this winter is cold'.Turns out,they will be ABOVE NORMAL,except if you stay in Sutherland.We still cant forecast why would anyone stay there pic.twitter.com/cQSoFcJP9o