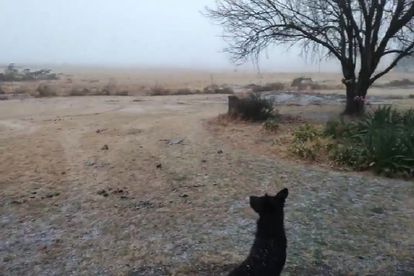 It has been described as a ‘very rare phenomena’, and locals near the Normandien Pass were left stunned by the wild weather conditions that greeted them on Friday. A scarcely seen ‘thunder-snow event’ was recorded in this remote part of KZN, leaving onlookers in awe.

A clip posted by weather experts ReenvalSA captures this unique occurrence in all of its glory. As snow continues to fall, the clattering of thunder bellows across open fields behind the property featured. Meanwhile, a solitary dog looks on with bemusement.

We’re with the canine on this one. It really is a bizarre sensory experience:

‘Very rare phenomena’: What is thunder-snow?

To get a better understanding of thunder-snow, we were informed by the Met Office about its quirks and characteristics. According to the UK’s top meteorological professionals, the snow tends to muffle the noise of thunder. This limits the range of who can actually hear it.

“When thunderstorms form in wintry conditions they can sometimes give rise to heavy downpours of snow. This is often known as ‘thunder-snow’. Interestingly enough, the snow contained within the thunderstorm actually dampens the sound of the thunder.”

“While the thunder from a typical thunderstorm might be heard many miles away, the thunder during a thunder-snow event will only be heard if you are within two to three miles of the lightning. These conditions can only occur ‘in a few months of the year’.” | Met Office

Normandien Pass in the limelight

If any location in South Africa was to experience a magical moment like this, Normandien Pass was always going to be a likely candidate. Home to a few modest properties, a shop, and a small-scale police station, this community sits atop the second-highest road in KZN.

It’s nestled snugly between Memel and Newcastle. The twists, turns, and steep inclines have made Normandien Pass a favourite amongst off-road enthusiasts over the years, looking to test the limits of their 4×4 vehicles.

Now, thanks to this thunder-snow, the small settlement could soon see a few storm-chasers take on the treacherous terrain!