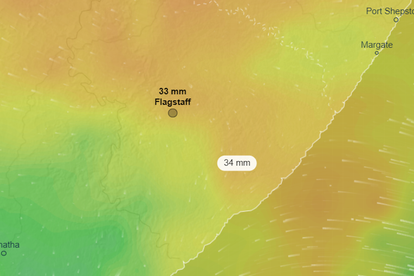 A substantial amount of rain is set to fall in the Eastern Cape over the next 48 hours – Photo: Ventusky

A substantial amount of rain is set to fall in the Eastern Cape over the next 48 hours – Photo: Ventusky

Parts of the Eastern Cape are bracing for the impact of adverse conditions this weekend, after Level 4 weather warnings were issued for several districts. Alerts for localised floods and heavy downpours will be in place from Friday afternoon, and won’t be lifted until the evening of Saturday 16 April.

It’s hoped that the same scale of death and destruction witnessed in KZN this week won’t be repeated down the coast. Over 300 people have been killed by the extreme weather, and the death toll is likely to rise.

Parts of KZN ended up with a Level 9 warning on Tuesday, as over 300mm of rain lashed certain regions in the province. Although a Level 4 warning is less severe, the SA Weather Service (SAWS) has warned that the following areas will be exposed to ‘thundershowers and significant rain’ over the next 48 hours:

The danger of localised flooding has also been raised by SAWS, who have warned that informal settlements and low-lying land are vulnerable to rising waters. Driving conditions will also become difficult over the Easter weekend.

“The flooding of roads and settlements, displacement of affected communities, possible damage to roads and bridges and poor driving conditions are expected. Sinkholes, mudslides, rockfalls and soil erosion are possible. Damage to formal/informal settlements and major disruption of traffic is possible.”

“If possible stay indoors and off the roads, avoid crossing rivers and swollen streams where water is above your ankles. If trapped in a vehicle during a flood, abandon it and climb to higher ground. In buildings, move valuables to a safe place above the expected flood level. In rural areas move livestock to higher grounds.”