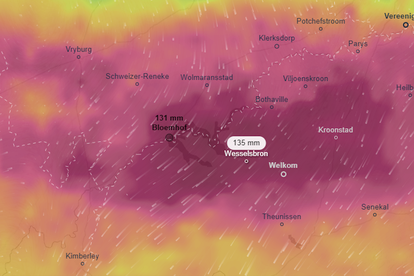 The SA Weather Service (SAWS) has confirmed that a disruptive cold front is set to wreak havoc across the central interior of the country over the next 72 hours, before making its way towards the east. Some regions, however, are now forecast to receive MORE THAN 100mm of rain.

More than 100mm of rain forecast across ‘multiple regions’

The intense low pressure system it will initially make its mark across three provinces. Rural areas, urban dwellings, and well-established towns are all set for a genuine lashing as we progress through the week. More weather warning are also expected to follow.

According to Ventusky, these regions projected to receive the most severe deluges:

As we move through the week, KZN, Gauteng and Mpumalanga are also likely to encounter difficulties with the heavy downpours. Flood alerts have already been published by SAWS, and they have warned that there will be no respite ‘for the next few days’.

“A cut-off low pressure system will dominate central and eastern parts of the country. This will result in scattered to widespread thundershowers from today, Tuesday 1 November, until Saturday 5 November. There is a possibility of flooding, especially over the central interior.”

“The risk of floods will gradually progress east during the week. KZN, Gauteng, and Mpumalanga are likely to be affected by Friday. The weather system is expected to exit the country late on Saturday.  Updates to forecasts warnings will be made regularly throughout the week.” | SAWS