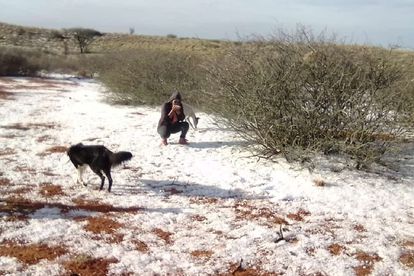 The hail fell rapidly and furiously in this part of the Kalahari on Tuesday – Photo: Reenval SA

The hail fell rapidly and furiously in this part of the Kalahari on Tuesday – Photo: Reenval SA

An extreme weather event caught residents of a small Kalahari town off-guard this week. The people of Askham were pelted by chunks of hail that were reportedly ‘as big as golf balls’, briefly turning the desert region into a winter wonderland.

Askham is one of the most remote locations in the Northern Cape. The small community sits near the international border of both Namibia and Botswana. It straddles the Kuruman River, and it takes just under two hours to drive to the town from Upington.

However, those who are based in Askham were treated to a very rare sight on Tuesday afternoon. This ferocious flurry blanketed some of the arid landscape, turning desert sands into a white tundra. One local managed to snap this sight during their dog walk.

Golf ball sized hail fell in #Askham in the Kalahari a while ago this afternoon. 📷Alistair William Allies pic.twitter.com/zR8fM04FvX

This freak storm has occurred in a week where a number of provinces are being subjected to some heavy weather. Parts of the Northern Cape, North West, and Free State were pelted by heavy rain this week. These deluges are now heading east, towards Gauteng and KZN.

Thunderstorms are also expected in Mpumalanga before the weekend. For now, the forecast remains unsettled before eventually clearing up within the next 48 to 72 hours. Funnily enough, the ‘golf-ball sized hall’ witnessed in Askham is not an isolated event for South Africa.

Just last week, a similar phenomenon was recorded in KZN. Residents of Nottingham Road were shocked when huge, over-sized drops of hail pelted down upon their community. A number of locals were forced to seek shelter at the time. You can read more about this incident here.