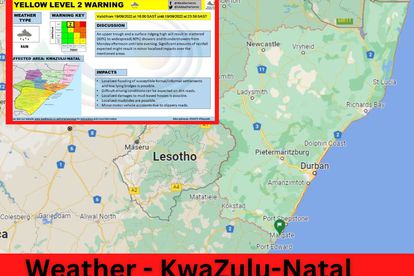 Weather: What is expected for Kwazulu-Natal on MONDAY Photos:Stock/GoogleMap

Weather: What is expected for Kwazulu-Natal on MONDAY Photos:Stock/GoogleMap

Heavy rain for parts of KwaZulu-Natal and a spell of cold are expected this week.

HERE IS YOUR LATEST WEATHER UPDATE FOR KWAZULU-NATAL

The South African Weather Service (SAWS) said a significant chance of heavy rain and flooding is possible on Monday, where Impact-Based Warnings are already in effect.

“On Monday, it is expected that the heavy rain warning in the Eastern Cape is escalated from level 5 to level 6, while a broad level 2 warning persists, spreading into KwaZulu-Natal.

“Moreover, a spell of overcast, cold and windy weather is expected to persist over much of Eastern Cape, KwaZulu-Natal, and Mpumalanga in the period extending from Monday through to Wednesday.”

The SAWS warned that residents of KwaZulu-Natal, and Mpumalanga, should therefore prepare for a three-day episode of rainfall, which may be heavy at places.

WHAT TO EXPECT IN THE EASTERN CAPE:

Meanwhile, a cloudy, cold spell of persistent rainfall is anticipated for some of the eastern provinces in the days ahead.

“In particular, the eastern part of the Eastern Cape is expected to experience a significant chance of heavy rain and flooding today and tomorrow, where Impact-Based Warnings are already in effect.

“There is already a high likelihood of rainfall across much of the Eastern Cape province during where level 2, as well as level 5 warnings, are already in place for disruptive rainfall, leading to localised to widespread flooding, persisting overnight.

“Within the level 5 warning area, 100 mm (or more) of rainfall may occur within a 24-hour period. For tomorrow, please note that the heavy rain warning is escalated from level 5 to level 6, while a broad level 2 warning persists.”

According to the SAWS, a well-developed upper-air trough, associated with coldness and instability, intensified on Sunday over the southwestern parts of southern Africa.

SNOWFALL WAS EXPECTED TO MAKE LANDFALL ON SUNDAY EVENING

“The South African Weather Service (SAWS) is confident that, during the coming days, this system will further deepen and intensify, forming a cut-off low over the southern and central interior.”

It furthermore said while much of the interior of the African subcontinent is currently relatively dry, this system is expected to introduce a rainy spell to some of the eastern provinces.

This system is expected to shift progressively eastwards, resulting in mostly clear, rain-free conditions by Thursday.

Residents in the affected areas should note that sustained rainfall over a relatively large area will inevitably lead to the ground becoming saturated, resulting in overland runoff into river and stream systems and heightening the risk of localised flooding.

Under such circumstances, informal dwelling structures, especially those built of mud bricks, will be particularly prone to sudden collapse.

The public has been advised to keep jackets and blankets close at hand, as the weather will remain very chilly over the abovementioned provinces.

DO YOU HAVE PHOTOS OF THE SNOW? PLEASE SHARE!

Please email your photos and videos to Corne@thesouthafrican.com

The South African Weather Service said it would continue to monitor any further developments relating to this weather system and will issue subsequent updates as required.