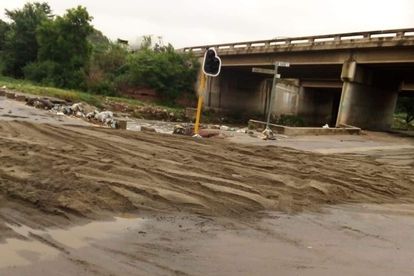 A week of extreme weather in various parts of South Africa is showing little sign of letting up, with the South African Weather Service (SAWS) warning that more heavy rains are expected in the Northern Cape, the North-West province, and the Free State on Sunday 22 November.

The warning follows severe flooding in Tshwane and Gauteng that led to a petrol station roof collapsing onto several cars in Vereeniging. Earlier in the week, more bizarre weather resulted in a tornado ripping through Mthatha in the Eastern Cape.

SAWS forecaster Luthando Masimini said that thundershowers can be expected, as well as heavy rain in many parts of the country.

“We are experiencing cloudy conditions over the central and eastern parts with isolated to widespread showers and thundershowers,” he said.

SAWS warned of severe thunderstorms that can result in damaging winds, hail & heavy downpours could cause localised flooding in susceptible settlement areas and low-lying areas in the Eastern Cape on Sunday. Their warning extended to eastern parts of the Northern Cape, as well as south-western parts of the Free State.

In Tshwane, Emergency Services have urged residents to remain vigilant after the week’s heavy rains, but announced that the severe weather resulted in no casualties.

“Incidents of flooding were reported to the Tshwane Emergency Services Call Centre related to the heavy rains experienced in various parts of the city on 20 November 2020. No loss of life or injuries were reported as a result of the heavy downpours,” they said.

They reported that the weather had led to major traffic disruptions, and said that metro services are on hand to deal with the damage caused.

“Major traffic backblocks, flooded roads and bridges, vehicles stuck in water, uprooted trees, and flooded houses were reported in various parts of the city,” they said.