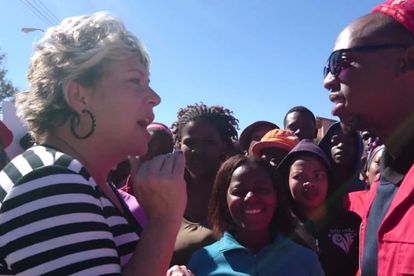 The town of Coligny is in an unofficial state of disaster. Protests rocked the town after the death of 16-year-old Matlhomola Moshoeu. Two white farm workers have since been charged with his murder and released on bail, the latter being a decision that sent mass anger through the town.

Three farmhouses were burnt down after the pair were released. The accused claim that they found Moshoeu stealing sunflowers at their farm, then when they were taking him to the police station he jumped off the back of the moving bakkie and died. The men are accused of pushing/ throwing him off.

Residents have been extremely vocal about race issues in the town, even making claims that there are still Apartheid type operations.

Friday saw EFF members organise a mass march to the town’s police station, the party was set to hand over a memorandum. Before they could get to the station though, a white woman confronted the group insisting that people listen to her. She claimed that she was not angry but kept demanding to know “Where is Malema? He is supposed to support you guys!”

Obviously, the crowd was angered by this, especially when the woman also kept demanding that they listen to her. SAPS officials stepped in and had to escort her away, all while attempting to explain to her how volatile the situation is and just how angry the marchers are.

The woman clearly didn’t want to leave though, she can be heard screaming “let go” as police had to use a little bit of force to get her to safety. Check out the clip from TimesLive, below.