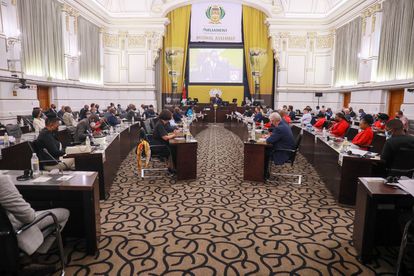 After the debate on the DA-proposed motion of no confidence in President Cyril Ramaphosa’s cabinet on Wednesday, 30 March, there was chaos when Members of Parliament (MPs) – from all parties it seems – screamed their votes into their microphones.

Live updates: Follow the Cabinet motion of no confidence AS IT HAPPENS

Due to the limited space offered by the Good Hope chamber, which is housing MPs’ engagements since the parliamentary buildings burnt down, parliament is still using the hybrid sitting method which sees some honourable members physically present while the others join via the virtual platform.

After the fiery debate was concluded, Speaker Nosiviwe Mapisa-Nqakula explained that MPs would indicate their vote verbally – once the time to vote came.

The gathered MPs, however, decided to shout their answers immediately. Words cannot accurately describe the chaos that unfolded, so have a listen instead:

The vote is still ongoing via a roll call system.