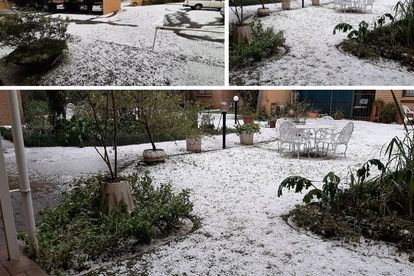 An unexpected hail storm hit Pietermaritzburg on Monday, while other areas of the country had snowfall.

WATCH AS RESIDENTS CAPTURED THE DOWNPOURS ON VIDEO

Msunduzi municipality warned motorists to proceed with caution as most roads were wet and slippery.

Residents were caught off guard when the unexpected hailstorm hit. They took to social media to share their video and photos.

Pietermaritzburg experienced severe winds and heavy hail, while winds in excess of 120km/h were forecast for East London in the Eastern Cape.

In the Eastern Cape, an urgent WARNING was issued for Eastern Cape residents to be ready to evacuate the following areas due to a devastating storm on Monday.

“The Metro is issuing an urgent warning to communities to be on high alert and those in low-lying areas to evacuate as rains continue to persist.
The SA Weather Services (SAWS) has issued a level 2 yellow warning for disruptive rain for the Province, including Buffalo City, valid from Mon 08 Aug 00:00 until Mon 08 Aug 20:00.”

The Municipality furthermore said disaster management and human settlements teams were dispatched to several affected areas after strong winds and persistent rains blew rooftops and trees, flooded homes, and swept away shacks across the metro.

ALSO READ: Eastern Cape residents in these AREAS should be ready to EVACUATE

Meanwhile, the snowfall of between 5- 20cm was confirmed in parts of South Africa on Monday.

According to Vox Weather, temperatures dropped low enough for snowfall on the mountain peaks of Sani Pass, Drakensberg, and Lesotho.