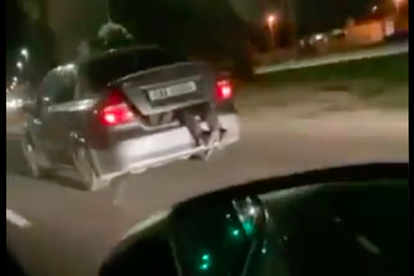 A motorist filmed two men travelling in the boot of a car in Cape Town on Wednesday night.

A motorist filmed two men travelling in the boot of a car in Cape Town on Wednesday night.

A passing motorist with a keen eye watched and filmed two men travelling in the boot of a sedan vehicle along Sandown Road in Cape Town on Wednesday night.

Fortunately the men’s legs could be seen wriggling in the boot, so clearly, the Table View travellers were still alive when captured on video.

@Bosbeer2006 which keeps the Tweeps up to date with breaking news stories and the latest crime trends posted the video on Twitter. The video  shows the boot of a moving vehicle slightly ajar and the legs and feet of two men sticking out the back.

The video raised a few jokes and some reprimands after people watched it on Twitter. Some told off the driver for his or her dangerous driving move and for filming with a cellphone while driving.

@2RodLeo Tweeted: “Where is the law enforcement officials? This kind of lawlesness should be discouraged and perpetrators must be heavily penalised. South Africa is not a banana Republic.”

To which @Bjorn35309701 replied: “I know! They should be charged for using their phone while driving! Tut tut…”