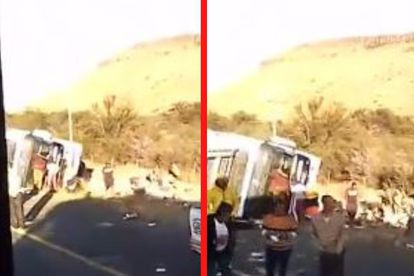 Wait, what?! Watch as a truck wreckage was LOOTED for parts on an active accident scene on the N12.

PEOPLE CAN BE SEEN REMOVING PARTS OF THE TRUCK

Just when you thought you had seen it all!

A video shared on Twitter has since gone viral.

In the video, you can see several vehicles on the side of the road, with people busy removing parts of the wreckage of the truck on its side.

Earlier this year, a woman was given the title of ‘Looter of the year 2022’ after she was seen running with a severed cow’s head from a truck involved in an accident.

THE WOMAN WAS FILMED ON THE SCENE OF ACCIDENT IN LIMPOPO

According to a report, the accident happened on the N4 when a truck transporting cow heads was involved in an accident. It is reported no one was hurt.

A traffic officer running next to the woman filming the whole spectacle is also seen in the video.

Last year, looters made off with beer while people lay dead on the N2 after a multi-vehicle accident in KwaZulu-Natal on Saturday.

LOOTERS TOOK OVER THE SCENE AND MADE OF WITH BEER

The accident happened on the N2 between Stanger and Zinkwazi, where multiple vehicles were involved in a collision, including a beer truck.

Emergency services were hampered on Saturday in managing the scene by looters who were ridding the truck of its cargo.

“Three people have lost their lives in the accident. A further two patients are critical, while two more are in serious condition.

“It is alleged that a vehicle was overtaking multiple vehicles when it lost control and hit the truck, which in turn struck several cars.”