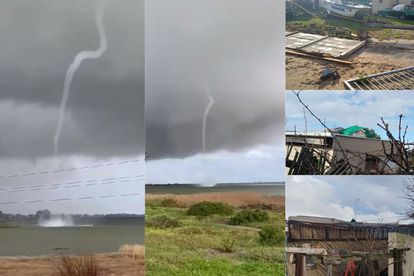 This is one waterspout the incy-wincy spider won’t be climbing up any time soon! – Photos: Facebook / Ettiene Laubscher

This is one waterspout the incy-wincy spider won’t be climbing up any time soon! – Photos: Facebook / Ettiene Laubscher

A tornado and a storm caused destruction in Western Cape on Saturday. And luckily, it was all caught on camera. Watch the video below.

WATCH THE PATH OF DESTRUCTION CAUSED BY THE TORNADO

Fences and roofs were blown off in the path of destruction in the small coastal town of Velddrif.

A resident shared these videos on social media on Saturday afternoon, and the videos have since gone viral.

This comes as MORE rain, SNOW, and COLD weather is expected on Sunday in several parts of the country.

The South African Weather Service (SAWS) warned of a significant drop in temperatures as well as snow in several parts of the country.

Snowfall was confirmed in the Matroos mountain range in the early hours of Sunday morning.

Meanwhile, a weather warning was issued by the SAWS for waves of up to 5metres in several parts of the country.