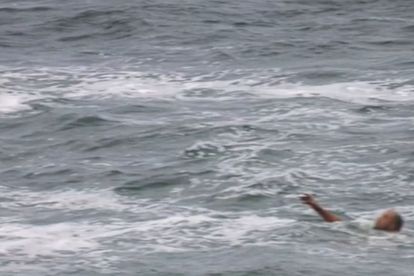 A pair of fishermen were saved from drowning in the sea by three men that heeded the National Sea Rescue Institute’s (NSRI) call. The daring rescue took place in the Western Cape on 2 April and was caught on camera.

The NSRI said that on that cold and windy morning in April, two fishermen were washed off the rocks at Rooi Els in the Western Cape at approximately 7:18. A nearby coastwatcher attached to the institute alerted three men who were preparing to head to sea and catch crayfish – William Boltmann, Richard Boltmann and Francois Koekemoer – to the drowning in progress and asked them to use their rigid hull inflatable boat (RHIB) to help the fishermen.

“With no time to spare and without hesitation, the three men grabbed an NSRI Pink Rescue Buoy and launched their RHIB to save the fishermen’s lives,” said the NSRI.

“The three men carefully considered how they would rescue the two fishermen in the water and using their years of boating experience managed to rescue the fishermen who were by this stage hypothermic and in grave danger of drowning.”

NSRI PINK BUOY MADE THE DIFFERENCE

Before the trio launched their rescue mission, Francois fetched the NSRI’s Pink Rescue Buoy at the Rooi Els slip. Once in the water, Richard took the helm of the boat and William assumed the responsibility of getting the two fishermen into the craft.

The strong winds meant that it was a struggle to throw the buoy and William had to swim out to sea twice.

“I knew I had to act fast,” said William. He said that the rescue would have been a lot more difficult – and dangerous – if they did not have the rescue buoy.

“You would never think that a small Rescue Buoy like that could actually give the guy’s hope, because a minute or two later, they would have gone down,” said Richard.

Once the fishermen were safely in the boat, the rescuers headed back to the Rooi Els slipway where the NSRI and emergency services were waiting. Both the fishermen are from Kuils River, Cape Town, and were treated for non-fatal drowning symptoms and hypothermia.

The NSRI honoured William, Richard and Francois with an award on World Drowning Prevention Day (25 July 2021) and commended their swift actions that saved the lives of the two fishermen.