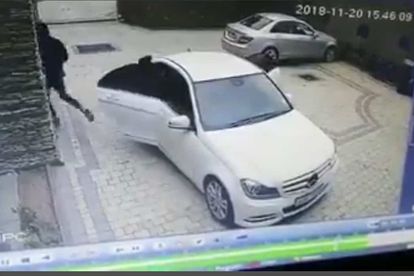 Lansdowne Crescent, in Durban North, was the scene of a violent shootout between armed security and a group of suspects who were caught trying to rob a house on Tuesday.

Armed officials from Marshall Security responded to a panic call that came from a house on Lansdowne Crescent. CCTV cameras on the property caught footage of a white Mercedes Benz entering the automatic gates of the property.

Four suspects got out of the car and forced their way into the house. The video does not have any audio so we can’t confirm whether any shots had rung out at that point. In the video, one of the suspects could be seen turning the getaway car around in anticipation of the four other suspects coming out of the house with stolen goods.

One suspect ran out of the house and opened the boot of the vehicle before running back inside. The video we have retrieved from the well-reputed vigilante service agency, @crimeairnetwork, ends abruptly.

However, a report on IOL News, written by Sihle Mlambo, revealed that the residents of the house had, at some point, hit the panic button that made an SOS call to Marshall Security.

Police spokesperson, Colonel Thembeka Mbhele, confirmed that the armed security moved swiftly and a shootout ensued as the suspects tried to make it out of the property.

“[The] four suspects involved robbed the family of jewellery. Marshall Security responded to the panic button [and] during crossfire, two suspects [were shot],” the Colonel added.

It is believed that one suspect died on the scene, while the other three tried to flee to a nearby cemetery. Once there, the second suspect, who had suffered gunshot wounds in the shootout, was found dead at the cemetery, while the other two suspects abandoned the car and fled on foot.

The two suspects are still at large and the police have revealed that they have put out an APB on them.

Watch: How four suspects entered the house in Durban North

ARMED ROBBERY AGGRESSION ESCALATION : BE WARNED THAT THE DEGREE OF AGGRESSION & USE OF HEAVY WEAPONS ARE ON THE UP. DO NOT ATTEMPT TO BE A DEAD HERO. FAMILIARISE URSELF WITH WHAT TO DO WHEN CONFRONTED WITH THIS SCENARIO. THE VIDEO IS OF DBN. KZN. pic.twitter.com/YVNrGi8Qif