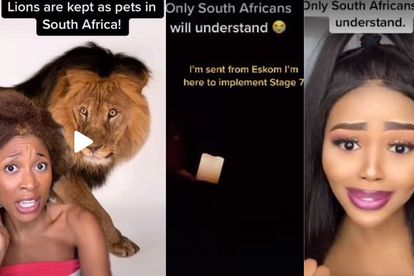 Yes, not even Eskom can take our humour away!

South Africans are notorious for their use of humour on the issues facing our country, and for using satire and jokes as a tool for social reconciliation.

We saw this earlier this week when the Minister of Police went viral for all the wrong reasons, after losing his cool at an engagement in Gugulethu.

The ANC stalwart was questioned about his department’s performance – and the state of policing in general – over the past few years. And that’s when it ALL kicked off.

Ian Cameron, of Action Society, ended up getting an earful from Bheki Cele. The hatted politician screamed and shouted at his adversary on Tuesday, listing his struggle credentials and talking about his upbringing.

Within hours South Africans had created a dance remix out of his public outburst but also several hilarious memes.

HERE ARE SOME HILARIOUS TIKTOK VIDEOS ONLY SOUTH AFRICANS WILL UNDERSTAND

But let’s look at some other hilarious TikTok videos that only South Africans will understand.

In South Africa, there is no shortage of struggles, from load shedding to fuel price hikes and the spiraling cost of living, but one thing that unites us is our ability to laugh at our pain.

No one can fault South Africans on our sense of humour and how we always try to make the best of a bad situation.

Earlier this year, a controversial questionnaire by Ryanair is another prime example of it.

The “racially discriminatory” test, which came under fire this week, sees the Irish airline quiz South Africans on their general national knowledge in an effort to “minimize the risk of fake passport usage”.

But South Afrikaans have hailed the two-page test – written in Afrikaans as “categorically insane and discriminatory.”