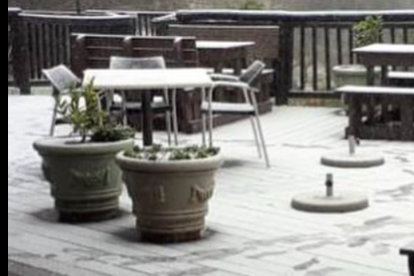 Snow seekers did not have to travel far from Durban to Hillcrest to witness a wintery dusting, when the cold front swept KwaZulu-Natal from mid morning on Saturday, as predicted by the South African Weather Service (SAWS).

Alverston and Hillcrest, which is located just 33,4 km West of Durban, had a light dusting of snow in the mid afternoon when temperates plummeted in the suburb, which usually does not experience snowfall.

Hillcrest residents and people further down the hill, nearer to Durban, were initially in disbelief and then surprised and delighted when they heard reports about the snow on social media.

Snow was also reported in other parts of the province.

The SAWS reported that it had snowed on Saturday morning at Sani Pass in the Drakensberg, while Afriski Mountain Resort in Lesotho also confirmed that it had received “a light dusting on snow”.

Bulwer and Impendle near Underberg as well as Mooi River, Dargle and Hilton had some snow fall.

The Quarry at Hilton Quarry Centre shared photographs on Facebook and invited people to take a drive to see for themselves.

“Snowball fight anyone? The Quarry Centre has been transformed into a magical winter wonderland this afternoon If you’re looking for some fun in the snow, you don’t have to go far to find it.  We wouldn’t have believed it if we didn’t see it for ourselves,” The Quarry said.

Nobs Mkhize joked on Facebook:Even though it’s freezing like hell today, but I must say that it’s so good to see some snow!  It’s snowing in our #Pietermaritzburg #Hilton #KwaZuluNatalProvince  Wooop Wooop! Oh I’m loving this experience guys!  I’m so #HAPPY! Happy #SnowingSaturday Darlings! Mnchwaah! See guys, we don’t only loot in Pietermaritzburg or in #KZN God also loves us! We are the chosen people and it also snows in #Maritzburg! Nje!  #Psalms23 #Psalms91 #Psalms103