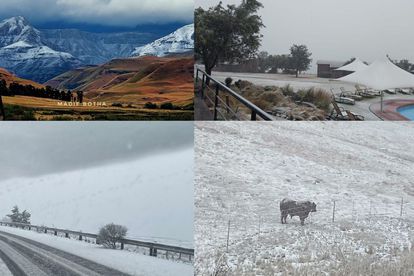 Yessss, snow has been confirmed in several parts of South Africa on Friday, and we have some photos to show you.

WATCH SNOW HAS BEEN CONFIRMED

This comes after the South African Weather Service (SAWS) issued a level 1 warning for SNOW in parts of South Africa for FRIDAY.

The warning was issued for snowfall in parts of the Eastern Cape from Thursday up until around Friday midday. More warnings were issued for disruptive rain, damaging winds, and cold conditions.

“A cold front, together with a steep upper-air through, will be passing through the Eastern Cape on Thursday, bringing in moisture and cold weather over the province,

A surface high-pressure will be extending its ridge over the Eastern Cape on Friday, pushing in more moisture and will result in cold, wet conditions over the province. Snowfall over the Southern Drakensberg area can be expected from Thursday night into Friday morning.”

It warned that snowfall would result in icy and slippery roads. Traffic disruptions and dangerous driving conditions can be expected.

“Angora and small stock farmers are advised to shelter small stock . Hikers and outdoor recreational activities will be exposed to these conditions and may contract Hypothermia if precautions are not taken.”

OTHER AREAS WILL ALSO GET SNOW – MORE INFO HERE

Meanwhile, VoxWeather said a new layer of SNOW is expected to fall on Wednesday over the mountains of the Western Cape, Karoo and Sutherland, spreading to the Eastern Cape mountains into Thursday.

Significant snow is expected over Lesotho and the southern Drakensberg mainly on Thursday into Friday.

Snow was confirmed on Wednesday in several parts of the country due to the significant drop in temperature reaching Gauteng on Sunday.