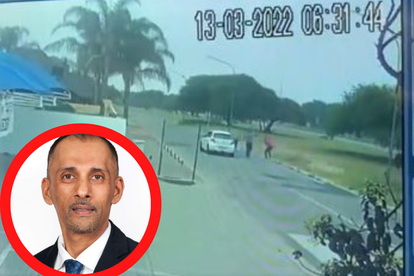 A shocking video has emerged which shows how Prof Mohamed Saber Tayob was brutally gunned down. Photos: Facebook/Twitter

A shocking video has emerged which shows how Prof Mohamed Saber Tayob was brutally gunned down. Photos: Facebook/Twitter

Shocking! While the motive for the shooting of Prof Mohamed Saber Tayob is not yet known, a video has emerged showing how he was brutally gunned down while jogging.

THE BRUTAL SHOOTING HAPPENED ON SUNDAY

The 51-year-old chartered accountant and associate professor at the University of Limpopo were shot several times, 8- 10 times, while jogging on Munnik Avenue in Polokwane on Sunday morning.

The video footage shows him jogging on the side of the road verge when a white VW Polo stopped next to him, and a passenger disembarked and shot Tayob several times at point-blank. The gunman is seen almost walking away when he turns around and fires more shots at Tayob, who is now lying on the ground. He then got back in the car and quickly drove away from the scene.

Police have launched a manhunt for the killers of Tayob.

DO YOU HAVE INFORMATION THAT COULD HELP THE POLICE?

Anyone with information that can lead to the arrest of the suspects is requested to contact Warrant Officer Joseph Malebana on 072-492-9635 or the Crime Stop number 08600-10111. Callers may opt to remain anonymous, and any information will be treated with strict confidentiality.

Meanwhile, the University of Limpopo’s executive and the faculty of management and law said they are “devastated by the brutal murder of one of the university’s rising academics and leaders.

THE UNIVERSITY OF LIMPOPO DEVASTATED BY MURDER

Tayob was appointed as the director of the school of accountancy at the university, effective from 1 March 2020.

He had joined the university in October 2009 as a senior lecturer of accounting and auditing, earning a promotion to associate professor in July 2017. He was also the acting programme co-ordinator for the university’s postgraduate diploma in accountancy from the beginning of 2020.

TAYOB WAS A SEASONED CHARTERED ACCOUNTANT

“Prof Tayob was a seasoned chartered accountant (CA) and academic, who served the School of Accountancy with distinction, making it his purpose to help it grow as a centre of excellence in all its disciplines. To this end, he worked tirelessly for the school to gain sustainable success in its core business of teaching and learning, research, and community engagement,” the university said in a statement.

it furthermore said Tayob was instrumental in ensuring that the University of Limpopo gained accreditation by the SA Institute of Chartered Accountants (Saica) to offer the Bachelor of Accounting Science and PGDA independently in 2011 and 2017 respectively.

HE WORKED TIRELESSLY FOR THE SCHOOL

“These milestones allowed the university to produce chartered accountants, quite a pivotal accomplishment.”

Executive Dean, Prof Omphemetse S. Sibanda, the Executive Team of the FML, staff, and students extend their deepest condolences to his family and friends, wishing them strength during this difficult time.