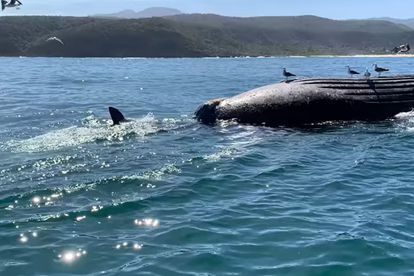 The NSRI issued a shark alert due to a number of animals feeding on a Humpback whale carcass in the Bitou Municipality. Photo: Screenshot from video.

The NSRI issued a shark alert due to a number of animals feeding on a Humpback whale carcass in the Bitou Municipality. Photo: Screenshot from video.

The National Sea Rescue Institute (NSRI) issued a shark alert for Plettenberg Bay and the Southern Cape coastline on Wednesday, 7 September, due to increased shark activity in the area. The predators were feeding on a whale carcass drifting towards shore.

The NSRI said the Humpback whale carcass was spotted between Natures Valley and Keurbooms Beach with a number of sharks eating from the carcass.

“We are appealing to the public, bathers, paddlers and boaters to be cautious due to the increased shark presence.

“The whale carcass is gradually drifting closer to shore and is expected to beach and this is being monitored,” said the Institute.

The relevant stakeholders, including the Bitou Municipality, are considering and investigating ways to remove the Humpback whale carcass.

This is not the first shark warning issued in the area this year. On 18 May, a Great White Shark was spotted in the Keurbooms River in Plettenberg Bay. It measured approximately 3.5 metres in length. A week later, a “large shark” was spotted in the surf line at Secrets Beach near Commercial Marine.