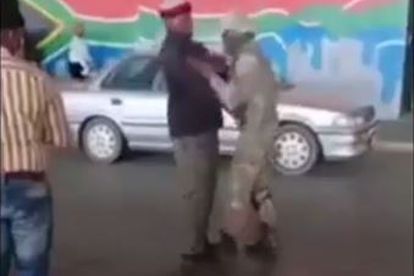 This was the warning from the SANDF on Tuesday after a viral video of a taxi driver accosting a member on official patrol duty in PMB.

Brigadier General Mafi Mgobozi warned that it is an illegal and prosecutable offence to interfere with any law enforcement official on duty regardless of the circumstances.

“The public is urged to refrain from committing acts of provocation or incitement against members of the SANDF.”

Mgobozi said the SANDF highly commends the soldier for maintaining his discipline under serious provocation.

“It is equally concerning to note a few social media comments commending this act of provocation.

“Such contempt, disregard, and disrespect of a law enforcement officer should be condemned with contempt it deserves by all law-abiding citizens.”

Meanwhile, President Cyril Ramaphosa has confirmed that almost 1 500 South African troops will be sent into Mozambique, in an effort to crush the ISIS insurgency that has flared up within the borders of the Cabo Delgado province. However, this SANDF deployment is likely to cost roughly R1 billion.

The soldiers, deployed to Mozambique two weeks ago, will remain in our neighbouring state for another three months.

ISIS-affiliated rebels have enforced a reign of terror in northern parts of the country, and there has been a steadily rising death count across the border over the past 12 months or so. SANDF forces were then called up earlier in July.

ALSO READ: SANDF sends 1 500 soldiers to Mozambique – but who pays the R1bn bill?