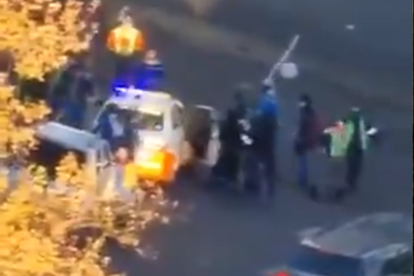 Trouble has flared in the exclusive suburb of Sandton on Wednesday morning, as protesters allegedly lit fires and clashed with police officers in this part of Gauteng. The business hub experienced some substantial disruptions, forcing the Johannesburg Metropolitan Police Department (JMPD) to issue a warning for motorists.

What we know so far…

The incident already seems to have been calmed by officers who arrived at the scene, but they were met with hostility. A group of disgruntled citizens could be seen hitting a police car, and one cop got caught up in the violence We’ve been able to gather some crucial details about the protest, shedding more light on these troubling circumstances:

Gauteng remains on high alert, following the chaotic riots that engulfed the province earlier this month. Widespread violence and looting, which initially started in KwaZulu-Natal, crossed the territorial border and brought destruction to regions of Johannesburg, Pretoria, and Alexandra. Sandton, however, fell back into the firing line today.

According to JMPD sources, the unrest has now been quelled, and traffic is free to flow through Sandton – however, that comes with an extra caveat: Officers have warned commuters in this region to ‘exercise caution’.

“Traffic Advisory: Protest action at Benmore and Lower Road, Sandton. The situation is calm at the moment, and traffic is flowing. Officers are on the scene, but motorists are advised to exercise caution.”