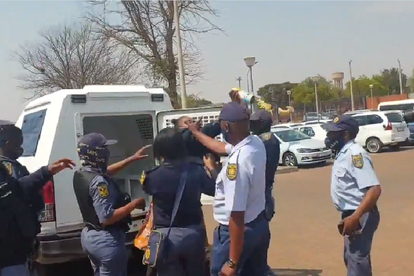 The bizarre antics of Nomia Ndlovu just get worse by the day. After an eventful week in court, the woman accused of orchestrating the murders of SIX people – most of them family – was filmed throwing food at journalists on Thursday.

This follows incidents where she sarcastically posed for the cameras, tried to banter with reporters, and even flashed her backside to the court. On Wednesday, she was accused of displaying ‘crocodile tears’ while on the stand.

Nomia Ndlovu is said to have cashed in on R1.5 million life insurance and funeral policies after the deaths of her boyfriend, sister, cousin, niece, and two nephews. Damning video footage that emerged this week showed Nomia Ndlovu instructing a hitman how to kill one of her relatives – but the defendant says she was ‘forced to say those things’.

However, her bid to gain the court’s sympathy is in tatters, after her erratic conduct became the focus of the trial. When leaving court on Thursday, the suspect lost her temper with journalists, and threw food (that appeared to be the contents of a tube of Pringles) at those in close proximity.

[WATCH] An agitated #rosemaryndlovu hurls her food at Journalists as police escourt her out of Palm Ridge Court. @Newzroom405 pic.twitter.com/xhc7i8RPSt

The court also heard that Nomia Ndlovu was allegedly plotting to have the investigating officer in her case murdered, too. The revelations have been added to her charge sheet, after law enforcement officials found evidence to implicate her in yet another act of deviancy. She is now facing TWENTY counts in total.

And, just for good measure, the alleged family member pulled a sickie in court this morning. The trial resumes tomorrow.

Court has adjourned until tomorrow as multiple-murder accused Nomia Ndlovu has complained about feeling unwell. The court has instructed her to get checked by a doctor. @KayaNews #RosemaryNdlovu pic.twitter.com/k8MvJjImIf