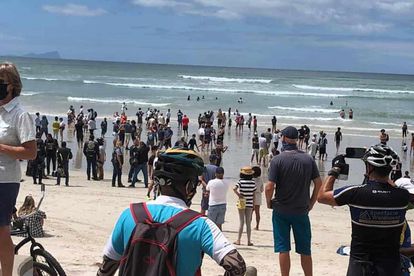 Scores of people have gathered at Muizenberg Beach, in a direct contravention of the Level 3 lockdown laws. Locals are fed-up with the current restrictions, which forbid visits to the seaside. Cape Town cops have confirmed that they are working to disperse the protesters from the area – but that task is proving easier said than done.

Amongst the protesters, some entered the water to swim, and others brought surfboards along with them. The mass act of civil disobedience is one of the clearest demonstrations against any lockdown law we’ve seen in the past 10 months. According to SAPS, this matter is now being handled by Public Order officers:

“SAPS Public Order Police members in Cape Town, Western Cape, have been deployed to Muizenberg where a large group of people descended on the beach. Details will follow soon.”

Earlier this month, the ANC government declared that all beaches outside of the Northern Cape must be closed to visitors, in a bid to limit the spread of COVID-19. In recent weeks, the number of new infections has declined dramatically, and the pressure on hospitals has also eased. Those in attendance at the Muizenberg protests say they’ve ‘waited long enough’.

Nkosazana Dlamini-Zuma raised further controversy in January, when she made an amendment to the regulations which redefined ‘the boundaries of a beach’, limiting access to businesses and coastal paths ‘within 100 metres of the high watermark’. However, the cohort of Capetonians taking a stand on Saturday have sent out a clear message to Cabinet.