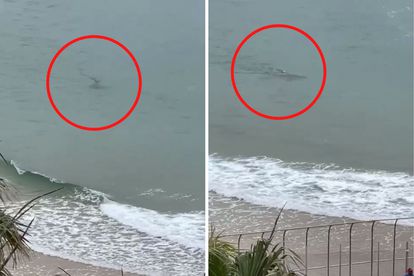 A MASSIVE shark was spotted in the shallow waters in Plettenberg Bay and was shared on social media. It is believed to be near the area where the young mother was killed.

WATCH AS THE MASSIVE SHARK SWIM NEAR THE BEACH

The video taken on Friday and shared on social media has gone viral.

The 38-year-old Kimon “Kiki” Bisogno was attacked and killed by a shark while swimming from the direction of the Beacon Isle Hotel. It is believed her husband and baby were on the beach with friends, waiting for her to return, when people started to scream.

According to National Sea Rescue Institute (NSRI) spokesperson Craig Lambinon, the local NSRI and South African Police Service (SAPS) were activated at 7:53 after reports of a fatal shark incident at Central Beach.

“The sea rescue craft Eric Stratford was launched. On arrival at the scene, the body of a woman from Cape Town was recovered from the water and brought to the beach.”

All beaches were closed by the Bitou Municipality on Sunday. The public was urged to be cautious along the Plettenberg Bay and Southern Cape coastline.

According to reports shark spotters, drones and other specialised technology are just some of the measures being considered to reduce shark attacks in Plettenberg Bay.

ALL BEACHES WERE IMMEDIATELY CLOSED

A News24 report stated that the Bitou Municipality and other stakeholders – including Plett Tourism and the National Sea Rescue Institute – have set up the Plett Shark Action Group to investigate measures to reduce shark attacks in the area and put together a formalised plan.

The report furthermore said that as part of that plan, awareness signage and shark bite kits are already being strategically placed at beaches in Plettenberg Bay.

The Plett Shark Action Group is investigating the costs of two drones, stationary cameras, specialised water-monitoring software and the appointment of specialised monitors to analyse shark activity and notify authorities of beach closures.

SHARK SPOTTERS DRONES SOME OF MEASURES BEING CONSIDERED

As previously reported, the Institute said sharks were feeding on a Humpback whale carcass that was gradually drifting closer to shore.

In June 2022, a man was killed by a shark at Sanctuary Beach, on the Robberg side of Robberg 5 in Plettenberg Bay.

All beaches were closed by the Bitou Municipality on Sunday. The public is urged to be cautious along the Plettenberg Bay and Southern Cape coastline.

In June this year, a man was killed by a shark at Plettenberg Bay. He was identified as Bruce Wolov, a beloved father who was passionate about the ocean.