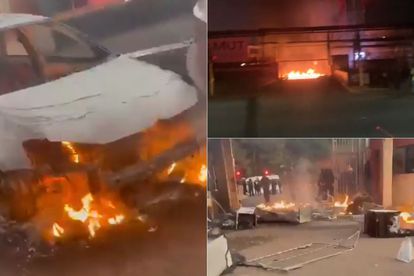 Students at the Mangosuthu University of Technology (MUT) led a protest at the campus in Umlazi on Thursday, 23 June. Photo: @1KZNtvNews / Twitter

Students at the Mangosuthu University of Technology (MUT) led a protest at the campus in Umlazi on Thursday, 23 June. Photo: @1KZNtvNews / Twitter

A protest at the Mangosuthu University of Technology (MUT) has been trending online. Reports through media and posts on social media show various objects, including a vehicle and campus property, that was vandalised and even torched.

MUT told students and staff not to go to the campus

The vandalism occurred during a student-led protest. This morning, the official Facebook page for MUT released a statement urging staff and students to not attend classes at the university.

MUT suspended all classes and planned examinations for Thursday, 23 June. All staff and students were told not to make their way to the Umlazi-based campus. The statement further said that protection services had been beefed up to protect those at the campus.

Authorities are still on the scene

According to ECR News, Metro Police made their way to the scene and although it is not clear yet what caused the protest, there are speculations that the students were demonstrating about NSFAS funding.

Authorities including the Public Order Police Unit are still on the scene.

“There was just a fire, the fire is attended and they are suspecting 20 students that were suspended. Our policemen are there and we will get more information. The fire department, SAPS and metro police are there. All is quiet now,”

Videos of the scenes are being shared online

@1KZNtvNews on Twitter shared numerous images and videos of the aftermath of the protest at the campus in KwaZulu-Natal.

In other protest-related news, it was previously reported that residents from informal settlements around the M19 near Reservoir Hills in Durban started a protest on Thursday, 14 April. Around 100 people made their way to the streets where they allegedly stoned cars and burnt tyres.

Reports have revealed that the residents were protesting against being removed from a temporary shelter. The informal settlement residents were moved to the shelters after their homes were destroyed by the floods in KwaZulu-Natal (KZN).

Durban metro police senior superintendent Parbhoo Sewparsad estimated that between 80 to 100 protestors were present. Sewparsad said that they were unhappy about being moved out of a school on Thursday, 14 April. Read the full story here.