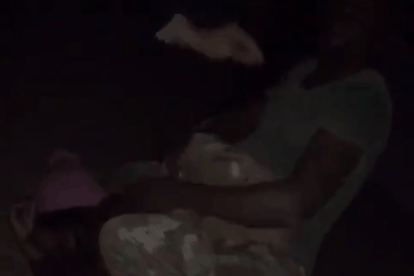 Social media users have called on government ministers and the relevant authorities to investigate the authenticity of a video uploaded to social media this weekend. A man wearing SANDF regalia was recorded while pinning an unknown female to the ground, sparking anger across online platforms.

The incident is alleged to have taken place in Montana, Pretoria. The man can be seen wearing his camouflage gear featuring SANDF emblems. The woman in the video can be heard whimpering, as the aggressor continues to kneel on top of her. He then turns to a group, who are trying to de-escalate the situation, and tells them that this is an argument with “his girl”.

It’s believed the altercation took place on Friday night. The video ends when the supposed soldier tries to take the phone being used to record the incident. The fate of the victim is left unclear, but the bystanders were at least successful in trying to get the apparent SANDF representative to release her from his grip.

His Name is Rhulani, he is a military personnel,Name of the complex is Oxford Heights, Montana, this happened on Friday. He is not yet arrested and the @SANDF @SAPoliceService I hope you will do your job and get this person behind bars and fired. #GBV #PutSouthAfricansFirstNow pic.twitter.com/IU3sA15nh1

The video was uploaded at the end of yet another traumatic week for the women of South Africa. The death of Tshego Pule, so violent and abhorrent in its nature, was followed by multiple other incidents of gender-based violence. Pule’s funeral on Thursday served as a timely reminder that this country still has an enormous battle to fight when it comes to eradicating the scourge of GBV.

We have reached out to both SANDF and SAPS on the video, and we’re still awaiting a response.