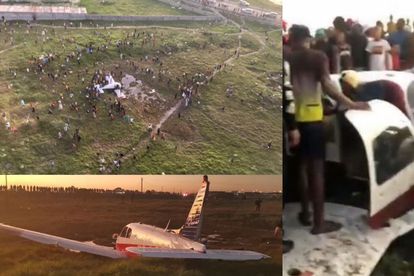 Hundreds of looters swarmed the wreckage of an aircraft minutes after it crashed in a field in Cape Town on Tuesday evening. The injured pilot and occupants were robbed of their personal belongings.

WATCH THE VIDEOS OF THE HUNDREDS OF LOOTERS SWARMING THE WRECKAGE

According to City of Cape MayCo Member for Safety and Security, Councillor JP Smith, the light aircraft went down in the Luzuko area of Lower Crossroads shortly before 18:00 on Tuesday.

A crowd quickly gathered at the crash site and when the pilot radioed air traffic control to call for urgent assistance, he reportedly said the aircraft’s occupants were being robbed of their personal belongings and the plane was being looted.

The City spokesperson Eckhardt Winks said the light aircraft belongs to a local aviation school that operates at the airport. It was on a training flight with a student when the engine failed.

THE PILOT RADIOED AIR TRAFFIC AND SAID THEY WERE BEING ROBBED

“A crowd quickly gathered around the plane. The pilot radioed air traffic, calling for urgent assistance, complaining that they were being robbed of their personal belongings, and the aircraft looted.”

He furthermore said Cape Town metro police were the first on the scene. They managed to secure the area, followed by the arrival of law enforcement and traffic services. Fire and rescue services dispatched motor pumps and a water tanker.

Winks said the plane belonged to a local aviation school.

BOTH SUSTAINED INJURIES AND WERE TAKEN FOR MEDICAL EXAMINATIONS

“Because of the actions of the experienced instructor, they were able to land the plane in an open field and managed to escape serious injury. Both occupants have been taken in for medical examinations.”

Meanwhile, in an unrelated incident, the two young pilots who were killed when their aircraft crashed on a farm in Kinkelbos have been identified, and a memorial is planned for them.