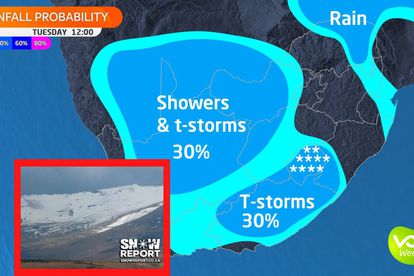 WATCH: Light snowfall expected for TODAY in parts of SA – here is the latest Photos: VoxWeather/SnowReport

WATCH: Light snowfall expected for TODAY in parts of SA – here is the latest Photos: VoxWeather/SnowReport

Possible light snowfall is expected for TODAY in parts of South Africa.

LIGHT SNOWFALL IS EXPECTED ON THE MOUNTAIN PEAKS

According to Vox Weather, it will be an icy Tuesday morning in the Western Cape, moving along the South Coast due to a cut-off low system. Some places might experience light frost.

Widespread thundershowers are expected on Tuesday in the Northern Cape, the North West, FreeState, and parts of the Cape provinces.

Isolated showers will reach the Western Cape and Eastern Cape around midday on Tuesday. Temperatures will drop low enough for light snowfall on the mountain peaks of Sani Pass, Drakensberg, and Lesotho.

HERE IS YOUR FORECAST FOR TUESDAY

More showers and thundershowers are expected over parts of the Northern Cape, spreading to parts of the Western, Eastern Cape, Free State, and North-West on Tuesday and reaching Gauteng by Wednesday.

The South Coast will have a sunny day but keep in mind the isolated thundershowers later.

Vox Weather warned that severe thunderstorms moving in from Namibia could affect Upington and neighboring towns in the late afternoon.

In Mpumalanga, cloudy and foggy weather is expected for the day. Gauteng will also have mostly cloudy weather with a slight chance of isolated showers.

It furthermore warned that the accumulation of snow might result in isolated loss of vulnerable livestock and snowmelt, resulting in slippery driving conditions.

This comes after heavy snowfall was reported in several parts of South Africa on Sunday afternoon.