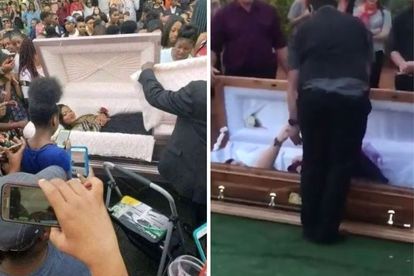 Can it get more dramatic than this? A learner recently left the nation in shock when she arrived at her matric farewell in a COFFIN!

WATCH THE SHOCKING IMAGES OF THE LEARNER’S ARRIVAL

@LebogangNM posted two images on Twitter of a matric learner arriving at her ball in a coffin on Saturday.

She tweeted: “Mehlolo ee. Arriving for matric dance in a coffin.”

In one image, the learner, a girl, is seen wearing a black-and-gold evening gown, lying in the coffin.

The other image shows her getting out of the coffin.

TWEEBS WERE LEFT IN SHOCK

It is not yet clear when and where the matric farewell took place or more information about the learner.

This reminded us of another matric farewell in which a learner arrived in a coffin in 2019 in Thabazimbi.

The video of the couple’s arrival in Martin’s Funeral hearse was posted on social media and quickly went viral.

IN 2019 ANOTHER LEARNER ALSO ARRIVED IN A COFFIN

In the video, the white hearse pulls up, and as the back door is opened, clouds of smoke are seen coming from the vehicle. A coffin is removed and carried by seven men.

The coffin is placed on the ground and opened by her boyfriend Chris de Witt.

The young Kaylee Rough is then assisted in getting out of the coffin while the crowd cheers them on.