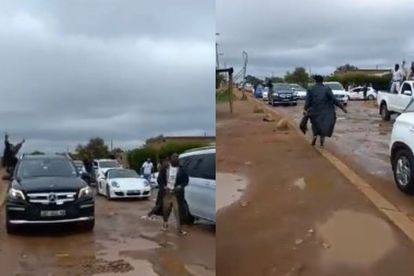 Police in Klerksdorp and Jouberton are on HIGH alert ahead of the funeral of a murdered Al Qaeda gang leader.

WATCH AS STREETS ARE TAKEN OVER AND SHOTS FIRED IN KLERKSDORP

Videos of the total lawlessness in the streets are being shared on social media.

In the videos, a convoy of cars is seen driving down a dirt road with people out of car windows and firing random shots in the air.

ALSO READ: Klerksdorp’s ‘John Wick’ WILL NOT open case against thugs he humiliated

Community members fear that the worst could happen.

THE FUNERAL IS PLANNED FOR SUNDAY

“Police have actually been on high alert since Paul’s murder not only for the funeral, but to maintain public order and general safety.”

The funeral for Paul will take place on Sunday at the Jouberton community hall.

The 40-year-old Paul was gunned down by unknown suspects at Extension 16, in Jouberton Location outside Klerksdorp. The shooting happened on 16 July 2022.

Paul was standing next to his car on the street and chatting to someone when three men who alighted from a white Toyota Quantum minibus without a registration number, shot and killed him instantly.

THE AL QAEDA GANG LEADER WAS GUNNED DOWN LAST WEEK

Mokgwabone said the motive of the murder was yet to be determined and an investigation into the matter is underway.

He furthermore said that despite a manhunt being launched for the killers, no arrests have been made yet.

At the time of his death, he was facing a charge of murder allegedly committed in March this year and one of unlawful possession of ammunition.

“Paul was arrested in May in Extension 13, Jouberton Location, by the Provincial Anti-gang Unit during an intelligence-driven operation, for the alleged murder of Thabo Ntsie (43).

“It is alleged that earlier in March 2022, Ntsie was walking from a tavern, accompanied by his friends, when they met Ndamoyi. The latter allegedly shot Ntsie with a rifle and fled from the scene. The victim was rushed to a local hospital where he was declared dead on arrival.”

Mokgwabone said during Ndamoyi’s arrest, his house was searched and a magazine and ammunition were found.

“Thus, he was further charged for unlawful possession of ammunition. Both the victim and suspect are alleged to be members of the same gang commonly known as Al Qaeda.”

Police have urged the community to work together this weekend and to refrain from taking part in any illegal activities.

“Law-abiding citizens are urged to work together with the police and to refrain from taking part in any illegal activities and report threats and acts of intimidation.

“Messages that are being circulated through social media platforms must be treated with caution and not recirculated without verification as some of them are misleading and aimed at causing unnecessary panic.”