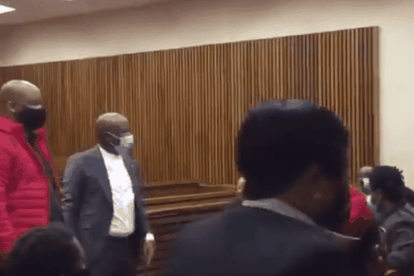 Julius Malema ensured that the relationship between himself and the lobby group AfriForum would remain frosty on Tuesday, after he demanded that certain members of his ideological opponents were marched out of the courtroom.

Ernst Roets was among the delegation that left the dock, amid allegations of the venue being too cramped. There was hardly any time for the ejected party to feel aggrieved, however, as proceedings were speedily postponed. The case will resume on 28 October at the venue in Randburg.

Julius Malema caused something of a stir on social media, when footage of his request was shared online:

What Julius Malema and Mbuyiseni Ndlozi face trial for

The pair stand accused of assaulting a police colonel in April 2018 during the funeral of struggle stalwart Winnie Madikizela-Mandela. The scuffle broke is alleged to have broken out after the police officer refused to grant them entry to the Fourways Memorial Park in Johannesburg, where the struggle veteran was laid to rest.

According to Afriforum, fierce critics of Malema and his party claim the police officer subsequently laid a charge of assault at a police station in Douglasdale, but that his complaint was ignored. This then prompted them to intervene.

Roets, speaking outside of the courtroom, accepted the delay was ‘necessary’. He hoped this case would be the beginning of the end for the controversial EFF leader, with AfriForum’s head of policy claiming that Juju ‘has got away with too much’:

“Julius Malema, probably more than anyone else in South Africa, is acting like he’s above the law. The South African Judiciary has allowed him to do whatever he wants – he can assault people, he can fire ammunition, and nothing happens. We are hoping this case will be the first domino to show him that actions do have consequences.”