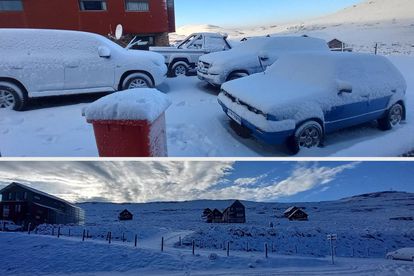 WATCH: It is snowing in parts of South Africa TODAY Photos: AfriSki

WATCH: It is snowing in parts of South Africa TODAY Photos: AfriSki

Brrr ….. snowfall has made landfall in several parts of South Africa and it is confirmed – it is snowing! Watch the videos here.

NEWS JUST IN – LIGHT SNOWFALL WILL CONTINUE UNTIL SATURDAY

The South African Weather Service (SAWS) confirmed that light snowfall has already made landfall in parts of South Africa on Wednesday and that it will continue until Saturday.

HERE ARE THE AREAS THAT WILL BE AFFECTED

The SAWS warned that the snowfall could result in icy and slippery roads, traffic disruptions, and dangerous driving conditions.

“Drivers are advised to avoid slippery roads and rather use alternative routes or postpone their traveling if possible.”

The following areas will be affected:

Do you have photos of the recent snowfall? We would love to share them! Please email your photos to corne@thesouthafrican.com (Please remember to include the location and your name and surname)

HERE ARE THE TOP FIVE PLACES IN SA TO GO HUNT FOR SNOW IN JULY:

This comes after several parts of South Africa had snowfall last month. The following areas had confirmed snowfall:

Here is where snow was been confirmed last month: