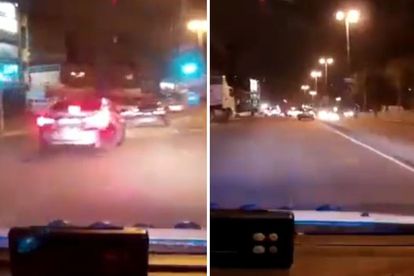 A high-speed chase in Durban went horribly wrong on Thursday evening. And it was all captured by the dash cam of the SAPS flying squad vehicle.

The video has since gone viral. According to reports the incident happened on Thursday evening but it could not yet be confirmed.

In the video, a high-speed chase is in pursuit with a car seen swerving recklessly in between cars in the traffic as he tries to evade the police behind him.

As the police vehicle closes the gap between them, the two-lane road becomes one lane at the traffic lights. And suddenly a car is seen right in front of the police vehicle. You need to watch the video with sound.

The driver of the police vehicle is clearly going too fast and he is seen smashing into the back of the car.

The sounds that can be heard in the video are similar to high-speed chases in action movies. Screeching brakes and the sound of metal colliding intensifies the horrific moment of the accident.

Social media users were quick to give their opinions. Most felt that the police officer who drove the vehicle should be playing more tv games to practice his hand eye coordination.

Meanwhile, a man died earlier this week after he drank an entire bottle of Jägermeister to win R200 in the Blue Corner Car Wash & Liquor Restaurant tavern in Limpopo.

The man aged between 25 and 30 died after he drank an entire bottle of Jagermeister to win R200 in a tavern in Limpopo.

WATCH AS A MAN DRINK AN ENTIRE BOTTLE OF JAGERMEISTER

The incident happened at the tavern called Blue Corner Car Wash & Liquor Restaurant in Ha-Mashamba Village near Elim in Limpopo.

The man died shortly after he drank the entire bottle of Jägermeister.