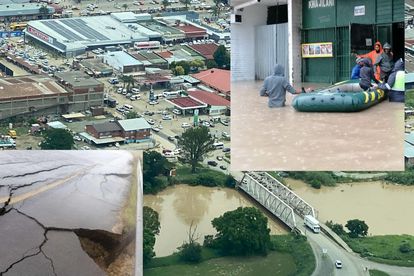 Heavy rainfall over the weekend caused havoc across the country, damaging roads and causing flooding in some areas.

According to reports, 35 people were trapped due to the Ladysmith CBD floods on Monday morning.

The lower parts of Ladysmith’s CBD were flooded after the Kliprivier Dam burst its banks on Sunday night.

The police rescue teams used rubber boats to evacuate people from Alexander and Forbes streets, and 35 people were safely removed on Monday morning.

The Al-Imdaad Foundation teams were also on the ground in Ladysmith assisting shop keepers trying to salvage goods and stock as floodwaters continued to inundate large areas of the town.

IN THE FREE STATE:

The downpours have damaged a large part of Qwaqwa, limiting the movements of residents – including learners and teachers.

According to the spokesperson for the Education Department, Howard Ndaba, MEC Tate Magoe, together with other stakeholders, will assess the situation on Monday and advise schools in Qwaqwa whether they will continue with the suspension.

Motorists were also advised to be cautious on the R711 road between Clarens and Fouriesburg, Free State, due to damage to the road surface.

The R59 between Parys and Sasolburg was also closed due to flooding.

This comes after several warnings for severe thunderstorms were issued by the South African Weather Service ahead of the weekend for the Free State, the Northern and Western Cape and KwaZulu-Natal.

Would you know what to do if you were trapped in a flash flood?

What to do when facing a flash flood