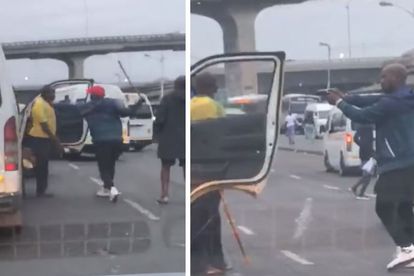 A heated road rage incident between a motorist and a taxi driver was caught on camera.

According to the information posted with the video on social media, the incident allegedly took place Tuesday in Warwick Avenue, Durban.

In the video, a man with a stick is seen attacking and beating a taxi driver. The taxi driver gets out of his vehicle, grabs the stick, and starts fighting back.

THE TAXI DRIVER IS SEEN FIGHTING BACK

Once the taxi driver grabs the stick, the man pulls out a gun and points him with the gun while another man continues to throw punches and kicks. The onlookers and those in the vehicle behind reacted with shock.

This all happens with several other people watching. It is not clear what happens as the video ends abruptly.

HERE’S HOW YOU SHOULD RESPOND TO ROAD RAGE

According to carinsurance.arrivealive.co.za, this is how you can avoid situations involving aggressive drivers:

ALSO READ: Man dies after being stabbed in chest and buttocks in KZN