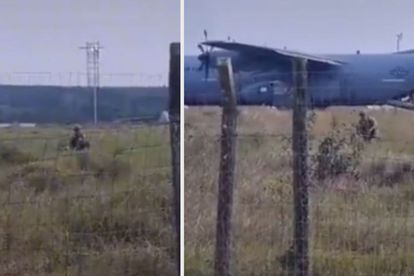 WATCH: Have you seen the US Air Force in South Africa? Photo: Video/TikTok

WATCH: Have you seen the US Air Force in South Africa? Photo: Video/TikTok

The US Air Force is in South Africa and it is STILL causing quite a stir with many speculating if US soldiers were deployed in SA to protect certain Government officials.

ARE THESE US SOLDIERS DEPLOYED IN SA FOR PROTECTION?

So is this true?

@baesickguy Why is the USA army in South Africa ? ???? #fypシ #BaeSickGuy #trending #tiktoksouthafrica #viral #southafrica #fyp #johannesburg ♬ Oh no, oh no, oh no, no no – Hip Hop

“The South African National Defence Force wishes to condemn in the strongest possible terms an article which appeared on the 6 July 2022 on Twitter stating that the US military personnel who are in South Africa are here to protect certain government officials. This is the most ludicrous statement and is dismissed with the contempt it deserves. That this Twitter message is not worth a response.”

Mahapa furthermore said it was a well-known exercise between the two militaries.

IT IS A WELL-KNOWN EXERCISE BETWEEN THE TWO MILITARIES

“The SANDF would like to state clearly and unambiguous that the US Army Southern European Task Force is in South Africa to conduct a joint and multinational peace support operation and humanitarian relief exercise with the SANDF under the operational code name Exercise SHARED ACCORD 2022.

“Exercise SHARED ACCORD 2022 (Ex SHARED ACCORD 2022) is the fourth exercise of this nature to be planned and executed in South Africa. Previous exercises took place in 2011, 2013 and 2017. The last exercise was conducted in the Northern Cape at the SA Army Combat Training Centre (CTC) Lohatlha, with the next exercise scheduled for 2020. But due to the outbreak of the COVID-19 pandemic, all joint exercises were suspended.”

According to Mahpa the aim of Exercise SHARED ACCORD 2022 is mainly to improve the bilateral military inter-operability.

“The exercise is to improve the bilateral military inter-operability. to conduct maritime force protection against conventional and asymmetric threats at sea, harbours, conduct air support operations to Peace Support Operations (PSO) for landward forces and exercise the provision of medical assistance and humanitarian relief to own forces and the local population.”

The exercise is scheduled from 05-27 July 2022 in and around Richards Bay in KwaZulu-Natal.

BACKGROUND ON THIS EXERCISE

Exercise SHARED ACCORD came about as a result of bilateral Defence Force Committee discussions that originated in 2009 and was approved by the Military Command Council (MCC) in 2010.

“The South African National Defence Force would like to reiterate that US Army is in South Africa for a joint exercise, and for not any other agenda as speculated on social platforms.

The SANDF wants to assure all South Africans that the multinational exercise named SHARED ACCORD has nothing to do with protecting any government official in RSA but rather pure joint training.

Does this new signing make sense for Pirates?