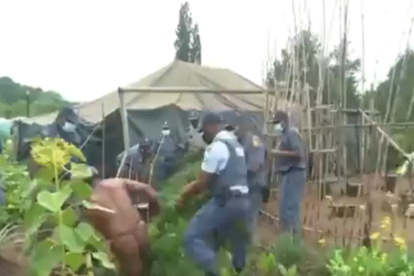 These Khoisan cannabis growers have declared war. Local police have been captured on video launching a rather violent raid. Reports say the event took place outside the Union Buildings in Pretoria.

CANNABIS PLANTERS STAND UP TO POLICE

The footage was posted on Twitter on Thursday morning, and it is expected to go viral as the day goes on.

As seen in the clip, two men, in what clears looks like Khoisan traditional attire, are seen resisting the confiscation of their cannabis trees.

A few of the policemen uproot and drag away a tree, at the same time, the two protestors latch on to the tree and get dragged away with it. It is all just a highly dramatic scene.

“Why are you destroying our creation? We are sick of the way the government is treating us!”

“We are declaring war!”

It’s been around three years since our law amended the cannabis bill, yet many of us are still confused about what’s legal and whatnot.

Ask any South African if weed cannabis is legal or not in this country and you’ll most likely get an unassured answer. Some people might say yes it is legal but will struggle to explain how.

Weed smokers might remember the day of days when the state parliament approved the Cannabis for Private Purposes Bill in September 2018.

So what is permitted by law regarding marijuana or weed or dagga in Mzansi? The bill allows adults to smoke in private homes, grow the substance, and exchange it with other persons in public but all under specific quantity limits. Read the full story here.