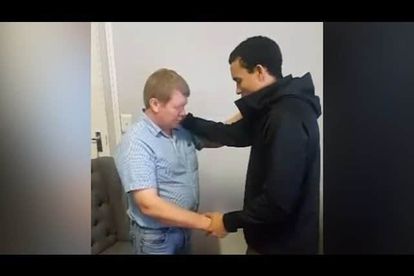 Remember the huge road rage incident in Paarl that went viral earlier this week? A white man could be seen threatening a coloured man with a stick before jamming the stick through the open window at the driver.

The video was viewed almost a million times across various platforms as Egan Ezra Vorster uploaded the video and explained how he had been called a “hotnot” by the man.

This saga has now taken a simply incredible turn after the aggressor (Marius Geldenhuys) reached out to Vorster to apologise.  Vorster shared live video on Facebook of the men washing each other’s feet and praying together.

Vorster revealed that Geldenhuys came up to him and started crying while he apologised. He had lost his job and was getting a divorce, “and just snapped because he is having a rough time.”

Vorster said he now realises that the incident was not racist it was just a pure act of rage after a buildup of stress. He is also dropping the charges he laid against Geldenhuys.

You can watch TimesLIVE video below to see the pair’s reconciliation for yourself.