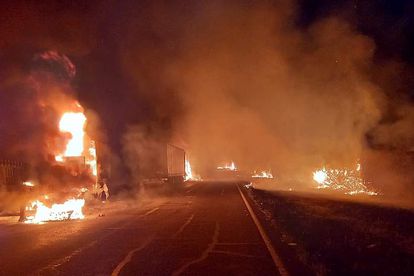 Police are on the lookout for a group of suspects who orchestrated a mass arson attack in Gauteng on Thursday. Multiple trucks – in at least nine confirmed torchings – were targeted in a night of destruction on the N3 and R103.

Police say a white Toyota Quantum and a black Volkswagen – both operating with unknown registration plates – blocked the N3 and R103 at about 20.30. Petrol bombs were thrown at the trucks on two of the province’s major highways.

A statement has since been released by law enforcement officials, confirming that the Heidelberg and Vosloorus areas of Gauteng remain volatile this morning. The expansive clean-up operation is already underway.

“Seven trucks were torched on the N3 between Heidelberg and Vosloorus while two trucks were set alight on the R103. Police are investigating cases of malicious damage to property and are appealing to anyone who might have information that can lead to the apprehension of the suspects to call the nearest police station or the crime stop number: 08600 10111.”

Anarchy on N3, R103, R23 & R550 freeways with multiple trucks (20…) being petrol bombed. This is Economic Terrorism & a threat to the livelihood of all South Africans – unacceptable & must stop pic.twitter.com/3z1lv5MB0g

On Friday morning, police confirmed that one suspect has been arrested for his role in these coordinated attacks. No motive has yet been established, but investigations will continue long into the weekend as Gauteng tries to come to terms with this act of mindless, sustained violence. No deaths or injuries have been reported as of 9:00 on 20 November.

JUST IN: N3 South and R103 between Kliprivier/Nigel and R23 offramp now closed to traffic due to burning trucks on both roads. #RamsMedia#FlyingNews pic.twitter.com/p13JcDhYTl